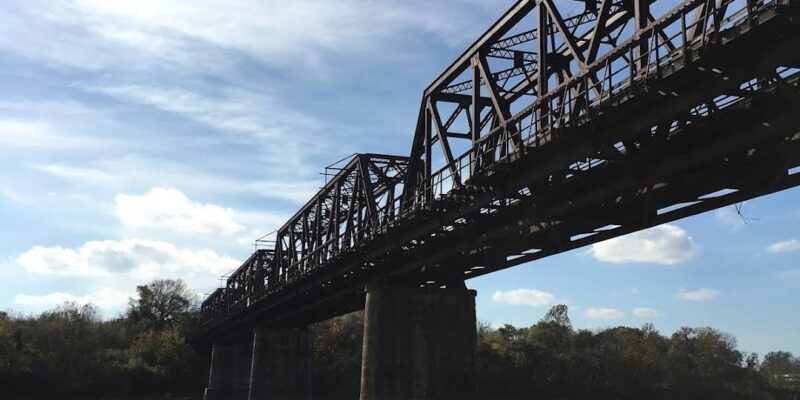 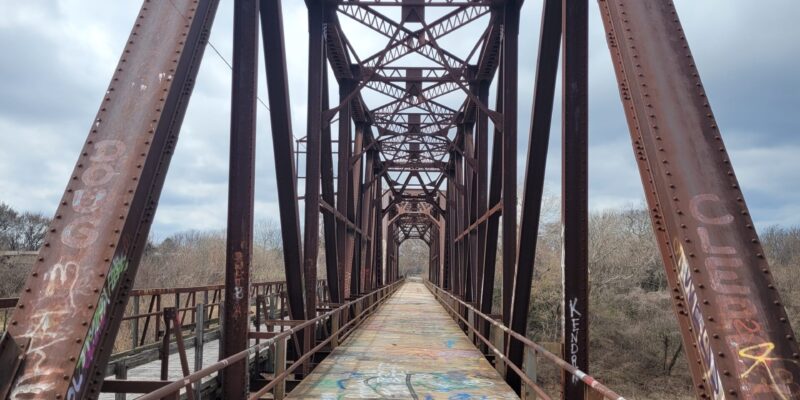 Be the first one to rate! Submit Review

Great spot to travel to for sightseeing and pictures, most of bridge is dilapidated and no longer used a new bridge was constructed recently(past 10 years), and traffic is routed across the Red River on it. The “old” Bridge has concrete barriers but you can squeeze a touring bike through the gap for pictures on the Bridge.

USE CAUTION IT IS NARROW.

Many tags/symbols litter the Bridge and concrete that others have left with spray paint.

Originally built as a railroad bridge for the Missouri, Oklahoma and Gulf (MO&G) Line. Completed in the late summer of 1910, the Carpenters Bluff Bridge was designed to withstand major floods such as the one in 1908 that had destroyed several area bridges. Its design also included a wagon shelf, an extra lane to serve travelers on foot and horseback, as well as horse-drawn vehicles, all of whom had to pay a toll for its use. In 1921, ownership passed to the Kansas, Oklahoma and Gulf Railway Co., which maintained the line until 1965, when the company ceased operations in Texas due to declining rail traffic. The Texas & Pacific Railroad maintained the bridge for a brief time and then deeded it to the counties of Grayson and Bryan. County commissioners agreed to convert the structure for vehicular traffic, and upon completion of that work, the bridge was opened as a free public thoroughfare. (From Historic Marker)

Rate us and Write a Review

Get Directions
Own or work here? Claim Now! Claim Now!